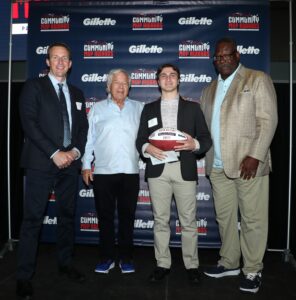 Twenty-six volunteers were recognized during an awards luncheon at Gillette Stadium on Wednesday, June 8

FOXBOROUGH, Mass. – For the past 25 years, the Kraft family and the New England Patriots Foundation have been recognizing volunteers for going above and beyond to give back to their communities through the Myra Kraft Community MVP Awards program. Formerly known as the Community Quarterback Awards, this volunteer recognition was renamed in 2011 in memory of Myra Kraft.

On Wednesday, June 8, 26 volunteers were recognized for their contributions at an awards ceremony at Gillette Stadium. In total, $275,000 in donations were distributed to the nonprofits represented by each volunteer. Twenty-five organizations each received $10,000 and the Grimes King Foundation for the Elderly received this year’s grand prize of $25,000.

“Of all the community initiatives we support through the Patriots Foundation, this was always Myra’s favorite and I am proud that we continue to honor her legacy of volunteerism by recognizing the amazing work of dozens of volunteers each year,” said Patriots Chairman and CEO Robert Kraft. “She loved meeting all of the honorees and hearing their heartwarming stories of volunteerism. There are so many people doing great things in our communities. It restores all faith in humanity. We enjoyed reviewing this year’s applications and selecting the 26 dedicated individuals that are helping to make the world a better place.”

Gillette, a longtime supporter of the New England Patriots and a cornerstone partner of the Patriots Foundation, served as the presenting sponsor for this year’s program. On hand to congratulate the award winners were Robert Kraft, President of Kraft Family Philanthropies Josh Kraft, Patriots, College and Pro Football Hall of Famer and Patriots Executive Director of Community Affairs Andre Tippett and John Claughton, VP of Grooming, North America, Procter & Gamble.

“This program has always been my family’s favorite charitable initiative,” said Josh Kraft. “Each year, we read hundreds of heartfelt stories of volunteerism and we are honored to celebrate those who go above and beyond to help others. We were excited to partner with our good friends at Gillette for this year’s program and appreciate their shared commitment to building stronger New England communities.”

“As a long-time witness of the great and positive impact the Kraft family has had on the New England community, Gillette could not be more proud to share in honoring Myra’s legacy as the presenting sponsor of the Myra Kraft MVP Awards,” said John Claughton. “Joined by the same drive to be a force for good for the communities we serve, Gillette looks forward to supporting all the honorees and volunteers that continue the
work Myra so passionately championed.”

Ryan Najemy of Wayland, Mass. was recognized as one of this year’s honorees and presented with a $10,000 donation for Jeff’s Place Children’s Bereavement Center.

Nearly one in 15 children in Massachusetts will experience the loss of a parent or a sibling before their 18th birthday. Sadly, when Ryan was just two years old, his mother passed away. As a child, he enrolled as a client at Jeff’s Place, participating in support groups for grieving children and families. Ryan was so thankful for the support he received that he decided to get involved as a volunteer.

“I am extremely thankful to receive this award on behalf of Jeff’s Place,” said Ryan. “I strongly believe in Jeff’s Place mission to provide hope and healing in support of grieving families. My personal experience at this bereavement center has built my character and the basis of my qualities.”

He attends group sessions to share his story, offer his support and to let children know they are not alone. Ryan has also utilized his passion for basketball, cycling and virtual adventures to raise money for Jeff’s Place. “It is very important to me that children receive the same opportunity to grieve and thrive in a supporting community, which led me to volunteer for this amazing non-profit organization,” said Ryan. “I am very humbled
to receive this award, as recognition for my volunteer work will only push me harder to create a positive impact amongst my community.”

Since its inception, the Myra Kraft Community MVP Awards program has recognized more than 450 volunteers and donated more than $3 million to support nonprofit organizations across New England.